Children from Broadhembury School played an important role in a Time-Capsule Event on Tuesday 21st July 2015.

The newly built Memorial Hall is nearly finished and a Time-Capsule is being buried there.

Charlie-Ann Swan and Zachary Jennings, from the School, were appointed as Bearers of the Time-Capsule, which they received from a Hall Trustee, Mr Ron Taylor, on the steps of the Village Post Office Stores and Tea Room, where items had been donated.

A procession of School Children and Staff followed the Time-Capsule to the new Hall site, where, after a short address from the Chairman of Hall Trustees, Mr John Bull, the capsule was placed by Charlie-Ann and Zachary, in position, ready to be covered in concrete.

The Children were then excited to see inside the New Hall, which they will soon use for P.E. and other activities. 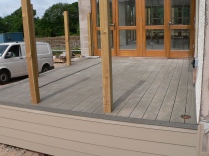 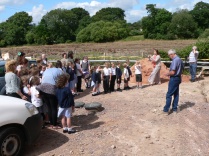